The story so far: The Centre plans to introduce 16 new Bills in the upcoming Winter Session of Parliament that begins on December 7, while the Congress strategises to corner the NDA government on the issue of inflation, tensions along the border with China and interference with the country’s independent institutions.

What happened in the previous session: a recap

Held from July 18 to August 8, the Monsoon Session clocked the second-worst performance in the 17th Lok Sabha. Parliament was unable to transact significant business due to constant disruptions over the price rise and hike in the Good and Services Tax (GST), leading to multiple adjournments and the suspension of several Opposition MPs.

While six new legislations were introduced during the session, just five were passed. One Bill — the Centre Personal Data Protection Bill — was withdrawn from the Lok Sabha. Addressing privacy concerns, the government said it would present the Bill in a revised form that fits into the ‘comprehensive legal framework’. A revised draft, titled ‘The Digital Personal Data Protection Bill, 2022’ was made open by the Centre for public comments last month. The Bill, however, is missing from the tentative schedule of the upcoming session.

To get a rundown of the day’s developments in Parliament in your inbox, subscribe to our Parliament Watch newsletter here.

Which are the new laws on the government’s agenda?

Overall, 35 Bills were pending when the two Houses were adjourned four days ahead of schedule in August. As per the schedule notified, , 16 new Bills have been listed for introduction, consideration and passing in the 2022 Winter Session. These include legislation tackling the electoral process in multi-state cooperative societies and one on the administration of cantonments. Seven other Bills, meanwhile, will be taken up for consideration and passing, including the Mediation Bill, the Anti-Maritime Piracy Bill, and The Wild Life (Protection) Amendment Bill.

On Tuesday, the Centre convened an all-party meeting to discuss legislative business. Lok Sabha Speaker Om Birla also called a meeting of the Business Advisory Committee, instead of the customary all-party meeting on the eve of the session.

Bills listed for consideration and passing:

The Bill seeks to introduce a comprehensive law on mediation, aiming to promote and facilitate mediation to resolve disputes and proposing mandatory mediation before litigation.

Present Status: The Bill was introduced in the Rajya Sabha in December 2021 and referred to a Standing Committee for review, which submitted its report on July 2022.

A Bill that could alter the mediation landscape

Mediation Bill: Not getting the Act together

Present Status: The Bill was passed in the Lok Sabha on April 1 this year, and is pending in the Rajya Sabha.

Explained | The criterion for SC status

Bill to include Hatees to ST list in Himachal Pradesh

The Bill was introduced to rename the New Delhi International Arbitration Centre as the India International Arbitration Centre to designate it an institute of national importance. Nationalist Congress Party member Supriya Sule called the Bill a “colossal waste of time”, when it was taken up for discussion in the Lok Sabha. In response, Union Law Minister Kiren Rijiju said the name change was necessary to prevent confusion as there was a Delhi Centre for Arbitration.

Present Status: Introduced in the Lok Sabha on August 5, the Bill was passed on August 8. It remains pending in the Upper House.

The Bill seeks to provide a regulatory framework for carbon trading in the country. It mandates the use of non-fossil sources for energy and feedstock. It also provides for the establishment of carbon credit markets and brings large residential buildings under the energy conservation regime. It amends the Energy Conservation Act, 2001, to enhance the scope of the Energy Conservation Building Code.

The Opposition raised concerns when the Bill was taken up in the Lok Sabha. While Congress’s Adhir Ranjan Chowdhury had said States and not just Central agencies should be allowed to issue carbon credit certificates, National Conference leader Hasnain Masoodi accused the government of not taking decisive steps to encourage the use of renewable energy.

Present Status: The Bill is pending in the Rajya Sabha. It was passed in the Lok Sabha on August 8.

The Bill seeks to amend the Wild Life (Protection) Act, 1972 and aims to increase the number of species protected under the law. Another objective is to make India compatible with the Convention on International Trade in Endangered Species of Wild Fauna and Flora (CITES) to prevent illegal trade. The international agreement also ensures that trade in specimens of wild animals and plants does not threaten the survival of the species.

A lengthy discussion was held in the Lok Sabha when the Bill was presented for discussion earlier this year. Several MPs suggested amendments to the Bill, but the legislation was passed without any significant modification.

Present status: The Bill was introduced in the Lok Sabha in December 2021 and passed in the Monsoon Session this year. It was referred to the Standing Committee on Science and Technology, Environment, Forests and Climate Change, which presented its report on April 21.

The government introduced this Bill to enable authorities to tackle piracy on the high seas, recognising the lack of comprehensive and standalone legislation in this domain. It also seeks to give effect to the UN Convention on the Law of the Sea (UNCLOS), which governs the oceans and their resources, providing a framework for the prosecution of piracy and related crimes on the high seas. As per the Bill’s provisions, convicts shall be punished with imprisonment for life, or death if the act of piracy causes or attempts to cause the death of another person.

Present Status: The Bill was introduced in the Lok Sabha on December 9, 2019. It was later referred to the Standing Committee on External Affairs, which presented its report in February 2021.

Explained | What is the Anti-Maritime Piracy Bill, 2019?

The Biological Diversity Act was enacted in 2002 to promote the conservation of biological diversity and sustainable use of and fair sharing of benefits from biological resources and ‘traditional knowledge’. The Bill seeks to reduce compliance burdens and simplify requirements for domestic companies, as well as exempt registered AYUSH practitioners and people accessing codified traditional knowledge, among others, from giving prior intimation to State biodiversity boards for accessing biological resources. The Bill also decriminalises all offences under the Act.

The Bill has come under heavy criticism. Environmentalists have opposed the legislation, claiming that the proposed amendments prioritise commercial trade at the expense of biological resources. They alleged that the amendments were made“solely” to benefit the AYUSH (Ayurveda, Yoga and Naturopathy, Unani, Siddha and Homeopathy) Ministry.

Rajya Sabha MP Jairam Ramesh, himself a member of the Joint Parliamentary Committee which reviewed the Bill, criticised its provisions in a letter to the committee chairperson, noting that the amendments paved the way for potential “abuse of the law”.

Present Status: The Bill was tabled in the Lok Sabha in December 2021. A Joint Committee of the Parliament was formed in 2021 for review. The JPC accepted several amendments made by the Union environment ministry and presented its report in August.

Key new legislations that are expected to be introduced:

According to a Rajya Sabha bulletin on the legislative agenda, this Bill “seeks to strengthen governance, enhancing transparency, increasing accountability and reforming electoral process, etc. in the multi-state Cooperative Societies by supplementing existing legislation and incorporating the provisions of 97th Constitutional amendment.” It also seeks to improve monitoring mechanisms and ensure ease of doing business for such societies.

The Bill relates to the administration of cantonment areas, aimed at “greater democratisation, modernisation and efficiency” to facilitate ease of living. The draft legislation also seeks to achieve greater developmental objectives in alignment with municipalities across the country.

As per the Parliamentary bulletin, the draft law seeks to amend the Forest (Conservation) Act, 1980 to remove “ambiguity in the applicability of the provisions of Act”. There are, however, no details about these ambiguities. It also seeks to promote plantation in non-forest areas and conserve forests.The 1980 Act regulates the de-reservation of forests and prevents the use of forest land for non-forest uses without government approval.

The proposed authority will work as an Integrated Water Resources and Basin Management Organisation for the Brahmaputra and Barak Basin in North Eastern Region, including Sikkim and West Bengal, as per the Rajya Sabha note on the draft law.

The Bill seeks to repeal redundant and obsolete laws.

Four amendments to the ST orders in Karnataka, Tamil Nadu, Himachal Pradesh and Chhattisgarh are expected to be taken up in the Winter Session. One of the Bills also seeks a revision of Scheduled Castes in Chhattisgarh.

Earlier this year, the Union Cabinet approved the amendment bill granting tribal status to the Hatti community living in the Trans-Giri region of Himachal Pradesh’s Sirmaur district, the Binjhia community in Chhattisgarh, the Narikoravan and Kurivikkaran communities in Tamil Nadu and the Betta-Kuruba community of Karnataka.

The government is also likely to table supplementary demands for grants for the financial year 2022-23.

What will be the Opposition’s strategy against Centre?

The previous session of Parliament was nearly washed out due to continuous protests and adjournments. Both Houses functioned for less than 50% of the allotted time in 16 sittings. The upcoming session is also set to begin on a similar note.

Setting the tone for the Winter Session, the Congress on Tuesday expressed concerns over the hasty appointment of the Election Commissioner of India during the all-party meeting. The party also demanded discussions on EWS quota in reservation and unemployment. Rajya Sabha MP and Trinamool Congress leader Derek O’Brien raised the issue of long-pending dues to States and claimed that the government was attempting to destabilise States via economic blockades. At the meeting, the TMC also demanded a debate on the Meghalaya-Assam stand-off owing to the border dispute. 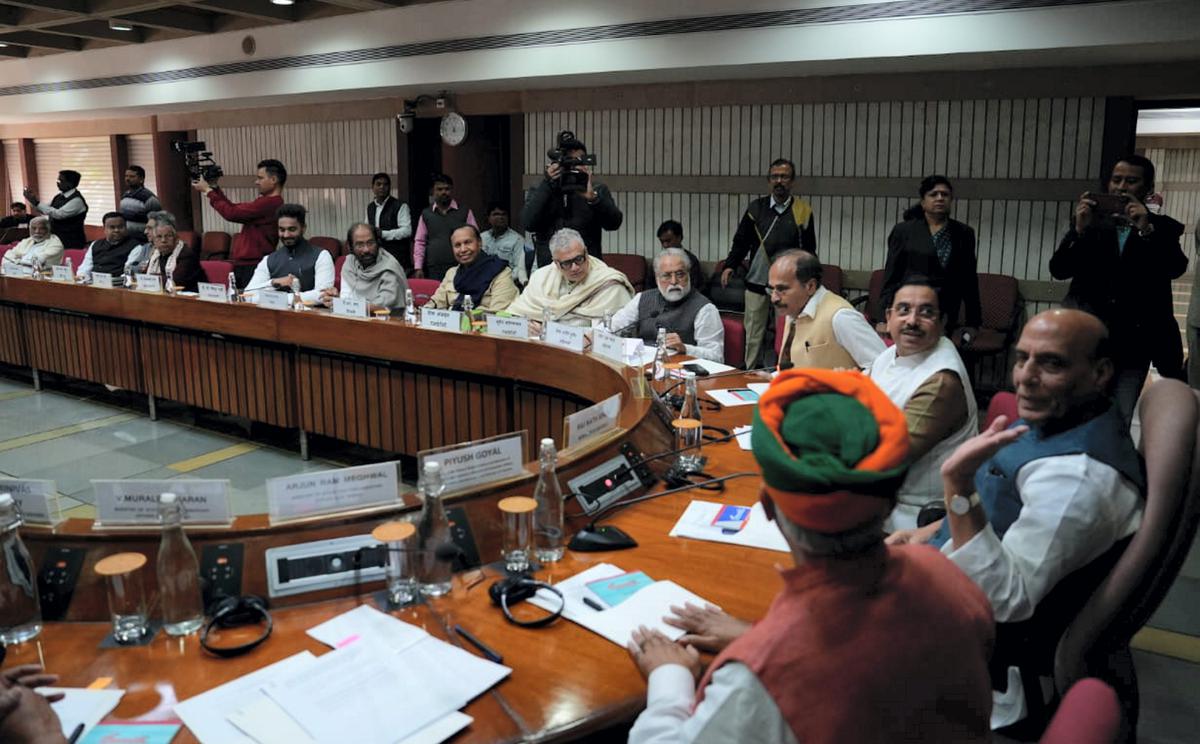 Defence Minister Rajnath Singh with Union Minister for Parliamentary Affairs Pralhad Joshi and other leaders during the all-party meeting, at Parliament House in New Delhi on December 6.
| Photo Credit:
PTI

Last week, the party lodged objections to three Bills notified for consideration and passing in the upcoming session— the Biological Diversity Bill, 2021, the Multi-State Cooperative Amendment Bill and the Forest Conversation Amendment Bill.

Congress’ communication chief Jairam Ramesh said the party has shortlisted over a dozen issues, including the recent collapse of the suspension bridge at Morbi and the AIIMS cyber attack. “There are broadly three big issues that we want to raise in this short session of 17 days. The first big issue is the stand-off that we have with China for the past 22 months. But there has been no discussion in Parliament. We will raise this and we hope that we will get the support of other parties as well,” he said. On issues plaguing the Indian economy, Mr. Ramesh said unemployment, price rise and the increase in GST, rupee’s slide, poor exports, privatisation and the promise to guarantee minimum support price (MSP) will be taken up in the Winter Session.

60 years ago, Parliament was in session while Phase-2 of the Chinese invasion was taking place. Debates were happening & the PM was listening. However for the past 2.5 years Parliament has been denied any opportunity for a discussion even on the border situation. 1/2

He said that the Congress would also want a debate about interference in independent and Constitutional institutions like the Judiciary, media and the Election Commission, saying that they were being made “an extension of the Prime Minister’s Office.”

The senior Congress leader added that party president Mallikarjun Kharge will continue to be the Leader of the Opposition (LoP) and approach like-minded parties to formulate a joint strategy. Congress leader Rahul Gandhi and other senior leaders, meanwhile, might skip the Winter Session due to the ongoing Bharat Jodo Yatra. “

After recall of paper over knowledge manipulation, NCBS storm over costs...