Actor Sundeep Kishan considers his new movie Michael, directed by Ranjit Jeyakodi, to be his most special film yet. The gangster drama starring Sundeep, Vijay Sethupathi, Gautham Menon, Divyansha Kaushik, Anasuya Bharadwaj and Varalaxmi Sarathkumar will release in theatres on February 3 in Telugu, Tamil, Hindi, Kannada and Malayalam. “The visual narrative, not just the story, will appeal to a wide audience,” Sundeep says with confidence during a conversation at his residence in Hyderabad.

Michael has been his labour of love for nearly three years. The idea for this film came from Sundeep and his team and they approached Ranjit Jeyakodi, who had directed the Tamil films Puriyaatha Puthir, Ispade Rajavum Idhaya Raniyum and Yaarukkum Anjael. Sundeep calls Ranjit’s writing and directorial style “raw and original”.

Sundeep reminisces, “On a particularly bad day I asked myself if this is the end of my career, what films would I be leaving behind for the audience to remember me. There weren’t many.” He began analysing what worked for him and what did not. There were significant films such as Prasthanam, Gundello Godari, Venkatadri Express, D For Dopidi and Routine Love Story in Telugu, Maanagaram in Tamil, and Shor in the City in Hindi and a few more that he was proud of.

When some projects that he had banked on did not shape up as expected, he decided to restart his career with a new approach. Michael is the first step in that direction, he says. “Ranjit worked on the idea given to him and came up with a ‘genius’ script. If I have to describe his ingenuity, I would say his narrative style has shades of director Selvaraghavan’s brilliance. Working on Michael has changed me as an actor and as a person.”

Having seen the first cut of the film recently, Sundeep believes that Michael will introduce the audience to Ranjit’s remarkable vision. “I am a fan,” he adds. The actor also believes that this reinvention will change how people perceive him as an actor. Will the film usher in Sundeep Kishan 2.0? “I hope so,” he responds. Through the different lockdowns, Sundeep worked out to sport a lean, agile look. He shed 10 kilograms to fit into the look that Ranjit wanted for his character. A reference point was Nagarjuna Akkineni’s lean, sharp look in Ram Gopal Varma’s Shiva. Sundeep was keen to break away from his loverboy image, which he feels can be limited after a point: “In cinema, people try to box you into a category and later you begin to question what you are capable of. I wanted to reinvent myself.”

The lean look that Sundeep sported in the 2021 film A1 Express was a step towards Michael in terms of getting fit. “I normally do not enjoy working out. I had to do it for Michael. For one portion of the film, I lived on egg whites and black coffee for about 18 days, after which my right leg took a beating. It is not healthy and I would not recommend this method to anyone. I was in a wacko mood to push myself.”

When asked if Michael is an origin story of a gangster, Sundeep says the audience can expect the unexpected. “The story moves through two eras and there is a lot of drama. It is tough for me to explain the film in a few lines. Maybe I can say this is like Prasthanam served with a high-energy drink and a lot of action. The action is raw. Ranjit has an original voice as a director, just like Deva Katta, Praveen Sattaru, Lokesh Kanagaraj, Raj and DK and a few others I have worked with.”

Since he brings up the topic of these directors, it is imperative to ask him if it was a conscious choice or happenstance that some of his Telugu films in recent years have been a cocktail of mainstream elements in trying to please the box office while the Tamil ones such as Maanagaram (Nagaram in Telugu) or the hyperlink film Kasada Thapara have been more genre-specific and rooted. “My journey has been a confusing mix of everything and it’s tough to categorise,” he says, explaining that in the initial years of his film career, he had the opportunity to be a part of films made by directors with strong voices in different languages. The runaway comic hit Venkatadri Express opened up the possibility of higher box office numbers and Sundeep says he had a childlike enthusiasm to work with bigger banners. “Among them, Tiger did well. Tiger and Maanagaram came to me around the same time. I took the story of Maanagaram to three Telugu producers who liked the idea but weren’t sure about producing it. S R Prabhu took it up for Tamil.”

Post Tiger, a few films didn’t work well; Sundeep concedes he took up a few projects just to be around in the industry. Added to that, he says there was a perception of nepotism since his uncles — cinematographers Chota K Naidu and Shyam K Naidu — were established names in Telugu cinema. “I am not a product of nepotism. I moved to Hyderabad from Chennai when I was 20. It’s not like I lived with my uncles. They introduced me to a few people, but beyond that, I had to prove my worth. I have been acting for 14 years, and now I don’t worry about the nepotism propaganda built around me. When people said I survived in Telugu cinema because of my uncles, I worked in Tamil and Hindi to prove them wrong.” Pausing, he adds that his love for Hyderabad has only grown over the years. “Every relationship I have built in this city fills me with a sense of achievement.”

There was also a perception that he interfered with the scripts. Sundeep points out that the dynamics have changed and actors are all the more involved in creative discussions today. There were times he sensed a mismatch between a script brought to him and what was being executed on sets. He says it has been a learning curve. After some of his films tanked, he went through a low phase. “There was a time when I didn’t know what my next film would be. I was home, had put on weight and did not feel like doing anything. My nine-member staff rallied around me to support me. My fans, some of them who I know well, and several others on social media that I have never met, cheered for me. That was reassuring and helped me tide over that phase.”

While production houses mooted projects and looked for directors and actors a few years ago, Sundeep says collaborations happen at multiple levels today and there is mutual respect among those who come together for a project. He cites Michael as an example for which he took the initiative. He and actor Vijay Sethupathi had been friends since the beginning of their respective careers. “Sethu anna plays an important character. I was clapping when I watched the film recently. We have known each other since the start of our careers and he graciously agreed when we asked him to be a part of this film.” 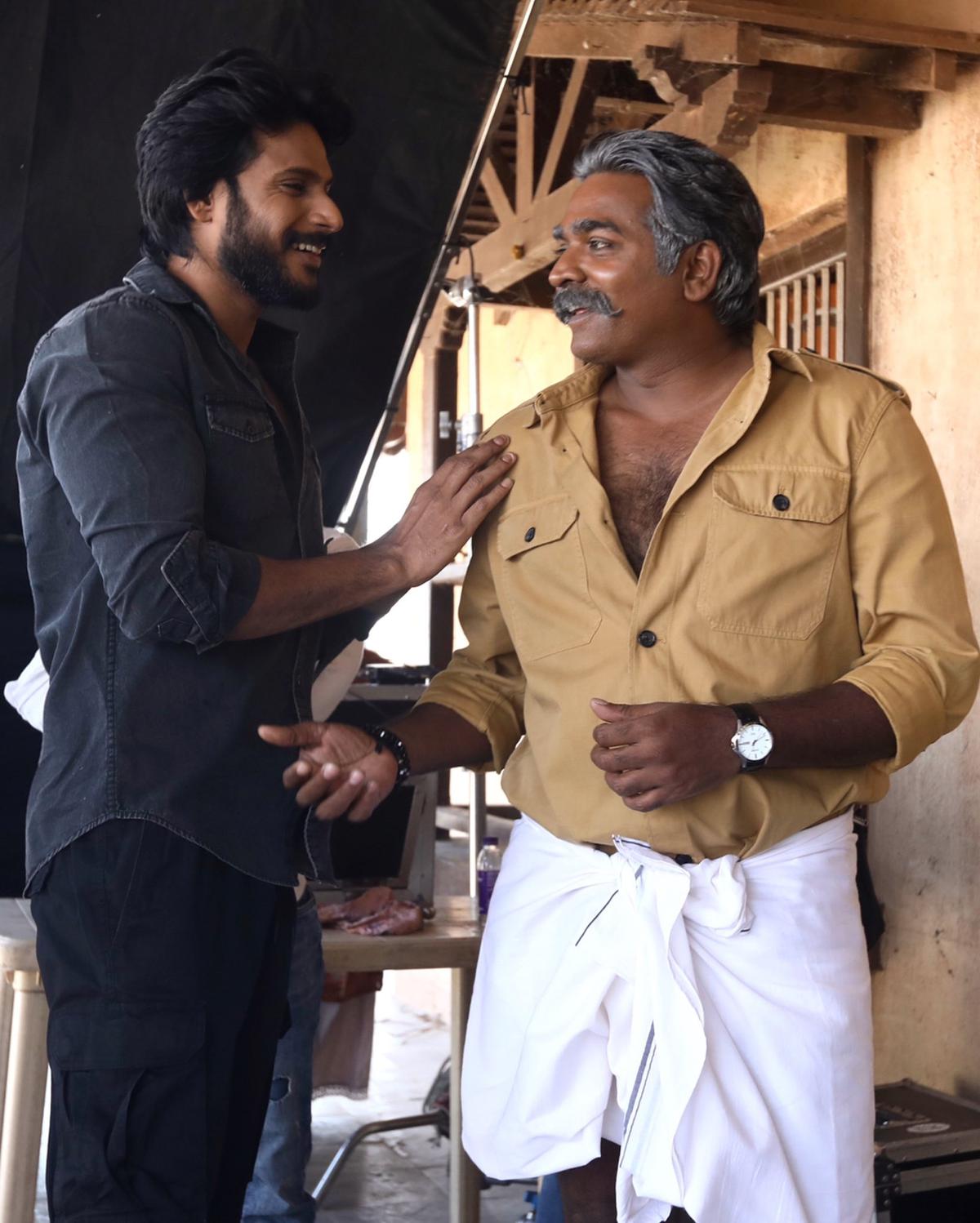 Michael also has him collaborating with Gautham Menon, in whose team he worked as an assistant director for the Suriya-starrer Vaaranam Aayiram (Surya S/O Krishnan in Telugu) before debuting as an actor. He had kept in touch with Menon and worked in his production Naragasooran, which is yet to be released. “Gautam sir’s role in Michael has a lot of grey. Today he is one of the biggest torchbearers of our film.”

On the sets, Ranjit and Gautam Menon would discuss cinema at an intellectual level and Sundeep, sometimes, felt out of place: “I would think someone should now play ‘Jai Balayya’ to lighten up the mood.”

Michael’s teaser, which was released in October 2022, helped create a buzz in film trade circles. This, in turn, made Sundeep’s future projects more viable. Sundeep will be seen in Vi Anand’s Telugu fantasy entertainer Ooru Peru Bairavakona, Buddy (an adaptation of Tamil film Teddy), Captain Miller directed by Arun Matheswaran co-starring Dhanush, The Family Man 3 series, among other projects. He will also be producing a few films. In the pipeline is also a project with his friend Lokesh Kanagaraj, who has become sought after nationwide after Kaithi and Vikram.

As for going nationwide with Michael, Sundeep says Telugu cinema has reached that stage where filmmakers and actors are keen to push the boundaries: “Sudheer Babu’s Hunt, Nani’s next film Dasara are all interesting and big projects. We saw how Nikhil’s Karthikeya 2 got recognised. S S Rajamouli is showing us the path and we have a responsibility to at least try and make films that can reach a wider audience.”

Hatred as the shape of water

Tracing the struggle for temple entry in Tamil Nadu